Colonial people established property taxation mechanisms in order to fund their collective or communal interests. For instance, in 1620, the pilgrims who had landed at and started settling in Plymouth, Massachusetts received a rather weird gift from the local Indians.

They were sent a bundle of arrows wrapped in snakeskin. Interpreting this as a threat, the 102 colonist got together and decided to build a fort to protect their community. To fund the fort, they established a tax on all produce from the land. Although each settler had been allocated an equal tract of land, the tax was based on the yield from the land.

The best illustration of the property tax system during the colonial period is the one established in Boston. The puritans who had settled in Boston implemented taxes to pay for the church and also for religious education of their children. This tax was supposed to be paid irrespective of one’s religious leanings.
Besides the church, the property tax also intended to pay for making and maintaining community amenities like roads and street lights. It was also supposed to pay for local town council expenses like night-patrol, the sheriff and other instruments of maintaining law and order.

The property taxes were maintained through a meticulous record system. For instance, the Boston Town Records of 1676 indicate details of each tax payer. This includes their name, number of acres of land, a map of the land, number (and value of the houses), number of mills, number of animals (i.e. cows, swine and sheep) and an assessment of their personal estate.

The taxes were collected by sheriffs (who were the tax assessors and collectors). They calculated the value of each person’s tax base on the recorded value of their property. Each person was expected to pay their due.

The amount of taxes were determined at an annual town council meeting. During this meeting, people exempted from taxes were called out. This usually included the poor, sickly and widows. For instance, during one council meeting, a widow with twelve children was not only exempted from taxes, but the council directed that some of the money collected be given to her to support her children.

Although Boston’s tax system wasn’t implemented in all colonies, other colonies had similar property taxation systems. Typically, property taxes were levied on land, houses, animals, mills and other personal property. The amount of taxes was agreed on a collective consensus by the communities, and there was a specific authority charged with collecting them. 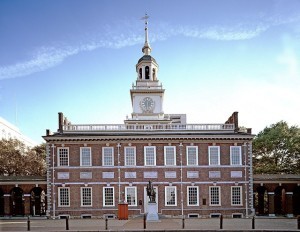 During the American War of Independence, all colonies agreed to raise taxes in order to fund the war. Most of the colonies raised property taxes – with the exception of Southern colonies in which the taxation system was mostly based on poll tax. The amount of money raised wasn’t enough and the Continental Congress ended up borrowing money from France to fund the war.

property tax buildingThe failure to raise enough money made for a rather fiery Constitutional debate. There were delegates who were pushing for a national property tax in order to raise revenue. However, Southern delegates opposed this move. They said that any such taxes should be imposed at state level.

In the end, the US constitution’s statement on direct taxes (of which all property taxes are) is that they should be appropriated to each state according to their population. The exact system of collecting them is left to each state.

However, this did not stop different administrations from attempting to levy national property taxes. A case in point is the John Adams administration which asked congress to pass a national property tax bill in 1797. This was because he was anticipating an imminent war with France. This bill appropriated a tax on each state according to population.

This aroused a lot of resentment, causing a band of locals to beat up and kidnap a group of assessors. When the sheriff arrived and arrested the culprits, a group of 400 men surrounded the Sherriff and forced them to release the kidnappers. Shortly afterwards, the leader of the revolt – John Fries – was arrested, tried and sentenced to death. However, following a public outcry, he was released at the last minute, and the law was repealed.

Throughout the 19th, century, property taxes were mostly imposed at state levels. Most state constitutions provided for a uniform property tax. Throughout most of this period, local sheriffs were the tax assessors and collectors. However, in the late 1800s, most tax assessment and collection duties started getting passed onto the financial officer.

In the early 1900s, advocates started calling for a lowering of property taxes. There was especially advocacy for the reduction of personal property taxes. Specifically, the aim was to reduce the taxes paid by homeowners and the owners of intangible assets.

These calls gained traction especially given that state or federal government had alternative means of income through sales and income tax. As a result, Presidents McKinley, Cleveland, T. Roosevelt and Wilson started pushing for the lowering of property taxes and implementation of income and sales taxes. Different states started adopting this approach.

From the 1930s to-date, not much has changed in terms of the movement towards reducing property taxes. There has been an emergence of movements pushing for tax reforms. Also, federal, state and local authorities are getting an ever lower portion of their revenue from property taxes. Income tax and sales tax is now the most prominent sources of revenue.

Property taxes are still prominent in almost every part of the US. The specific properties taxed, as well as the rates differ from state to state.